To cajole skeptical colleagues to my point of view, I ventured into a corner of the internet I had done nothing but roll my eyes at; amazing the efforts we’ll take to win an argument.

Hungry for a free, huge dataset I reached for the public ledger of polygon, a web3 cryptocurrency project. Opening up the mysterious terabyte payload I wondered aloud what a dApp column means and questioning if the gas fees scrolling across my screen were worth it.

I’m here to run large-scale quantile computations and these NFT traders are going to help me.

Big Query’s approximate aggregations save considerable processing cost and even make certain operations possible at huge scale. Since scant details of their implementation are made available, it limits our understanding of their characteristics and leads teams to fallback on tried-and-true exact algorithms.

In this post I’ll demonstrate that approx_percentile and other approximate aggregations in Big Query are deterministic by comparing against exact queries across caching behavior, runtime characteristics and data sampling; with this information you can decide if they are right to add to your services.

What’s this even about?

Let’s get technical: a deterministic function returns the same result under identical inputs.

A few years ago I worked on a project in the consumer space for a company that maintained leaderboards of performance statistics for millions of its users. Among the most expensive APIs the service supported was determining a particular users’ rank within a club, i.e. a set of other users. The exact operation scanned the entire table (Cassandra partition in this case) looking for the ranks of their friends to compare the user against; this rarely used API easily accounted for half of the system’s total CPU utilization. Lucky for the company’s infrastructure it was obscured away behind several clicks.

With this in mind an argument was made to use approximate algorithms. It’s worth asking in the context of a social application: how would a user who is “exactly” ranked 23,512th out of 100,000+ competitors know if instead an approximate function with a 0.5% error reported a rank of 23,400th instead and saved a tremendous amount of compute cycles?

At the time of writing this post I’m working on a A/B experimentation company selling to enterprise customers - the software needs to compile reproducible results of its customers’ while being able to execute against the warehouses of some of the largest companies in the world in a timely fashion. The engineers on this team need to carefully select deterministic algorithms.

Side-track: how are quantiles computed?

No you didn’t stumble onto LeetCode - it’s pretty straightforward: take a list of elements, sort them while keeping a count; any percentile is then trivial to ascertain.

While simple to reason about, these algorithms are slow because they need to sort the elements. For large distributed systems this involves shuffling massive data around the network.

Compared to t-digest, a well understood data structure which aids in computing approximate quantiles, simply needs to scan the dataset once without sorting it to accumulate statistics.

The difference in runtime is O(n log n) compared to O(n) - while this is theoretical now, later in this post I’ll show that the empirical differences on real queries are profound.

For non-trivial sized datasets these exact algorithms might even be untenable to compute - not only is the cost of executing them 1 or 2 orders of magnitude greater but its common to be unable to complete them at all when warehouse workers running out of memory.

It’s that time everyone’s been waiting for - I’ll review my experiment with exact and approximate quantile computation to understand how they compare.

We’ll use the information collected to demonstrate that Big Query’s approximate aggregations are deterministic.

BigQuery’s documentation says that query results are cached and identical requests will be served from cache without additional cost, albeit with some notable exceptions:

We know that when Big Query caches a query its internal engine blesses it as deterministic, therefore if results of queries containing approximate aggregations are cached, than those functions are deterministic.

Run several queries to explore which are cached.

Setting up the experiment

As I joked in the beginning of the post, for this experiment I’m going to use a public Big Query Dataset: a snapshot of Polygon, an Ethereum based smart contract platform.

Experiment 1A: Exact 50th and 99th percentile of gas costs

The current_timestamp function is documented as non-deterministic and this query is never cached.

Experiment 2A: Approximate 50th and 99th percentile of gas cost

Switching over now to looking at approximate quantiles.

Experiment 2B: Repeat the approximate query

What did we demonstrate?

First and foremost, Big Query caches the results of queries which contain approximate aggregations in the same way as exact algorithms. This is a strong indicator that these functions are considered deterministic by Big Query’s developers.

If Big Query’s implementation is sampling data internally and using the same random seed, this could give the appearance of determinism while masking its true behavior.

We see in our experimental results that the same number of bytes are being read in both algorithms. This is a strong indication that no sampling is happening.

Table sampling demonstrates that fewer bytes are being read. It also serves to show that approx_quantiles on its own performs no sampling.

I’m really excited to see how low the error is at the 99th percentile for the unsampled approximate function.

Really neat to see the amount of bytes processed exactly 1/10th as much in the sampled as the full set.

A really important observation is that the elapsed time, slot time consumed does NOT diminish by 10x in the exact algorithm.

We already discussed that this algorithm is slower than linear wheras the approximate algorithm’s resource utilization scales with data volume. 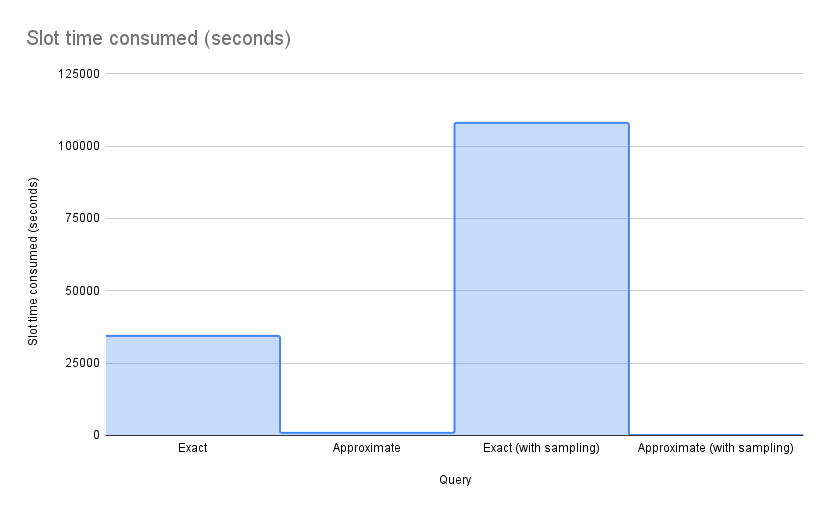 Snowflake publishes their internal algorithm as t-digest - it would be exciting if Big Query also shed some light into the internal implementation or allowed a configurable error parameter.

I’m excited to use these functions as the need arises for outlier detection, dimensionality reduction and other applications.

Big Query’s documentation “encourages” developers to implement their own quantile algorithms by using the provided lower level HyperLogLog sketch functions which have parameterized precision - this seems like a fantastic challenge for another time.